My colleague Ivor, (one of the Footsteps Guides) has been conducting walking tours with Footsteps to Freedom since the first rinderpest outbreak. Well almost. He has lived three score years and ten in Cape Town and worked in District Six as a medical student and later a houseman living in The Peninsula Maternity hospital and delivering all the local babies — “probably about 20-30 per day .I remember being woken by the footsteps of the people walking to work.” Ivor’s grandparents came to Cape Town from somewhere in Lithuania in the 1890s

Ivor recently toured the city on foot with a young couple, and as he related the story to me, I asked him to write it down. I sometimes get asked, “Should I do a bus tour or the Footsteps to Freedom city walking tour?” Recordings can’t answer your questions, is my reply. 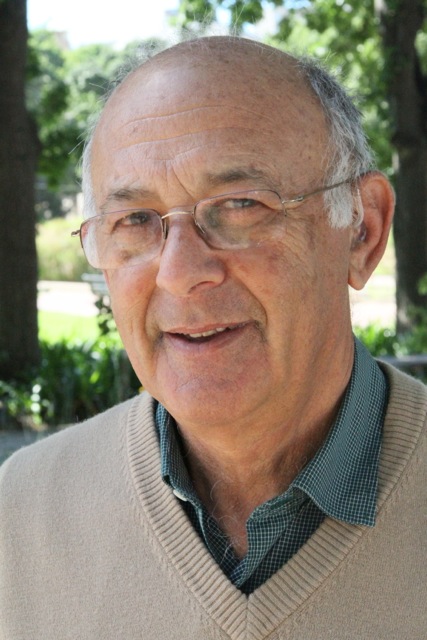 Ivor Shasklosky on tour with Footsteps to Freedom (2013)

“I shared a fascinating Footsteps to Freedom experience last week.The couple on the walk were; she from Buenos Aires, and her partner from Germany. They met in Argentina.
They then moved to Florida for several years and have recently re-located to Berlin.
The Walk was made fascinating by discussing the differing similarities in the political situations that had impacted on the civilian populations of South Africa, Argentina, Florida ( as part of the southern United States) and Germany.

The racist separations that had occurred in South Africa, Florida and Germany where Apartheid laws were based on the Nuremburg Laws of  Nazi Germany, though in South Africa , a genocide was never contemplated.

The Cape and Florida had a shared history of slavery though it was abolished without a war 30 years earlier in 1834 at the Cape.

Then South Africa and Argentina shared similarities of an oppressive ‘police state’.
Thankfully all can now be considered to be democracies. All need to deal with each one’s infamous past. South Africa is possibly a leader here in that much conversation,writing and cultural ’mixing’ is happening here and started at an early stage after the transition.

I had seen an opera in English at the Colon in Buenos Aires, shortly after the dictatorship ended.  It was called “The Consul” and resonated with me as we were still mired in apartheid.

A man is arrested from his home in the middle of the night and taken away by the secret police. The rest of the opera is the wife trying to find out where her husband has been detained.She never gets beyond the waiting room of the minister’s secretary. This could just as easily have been in my country,South Africa, during apartheid, or Nazi Germany in the 30’s and 40’s.

Conversations are so much more interesting than geo-based recordings. What if a one-legged dog passes on the left your bus on a solo-cycle balancing a beach ball on its nose … your recording will obediently tell you in which year the building on the right was completed.